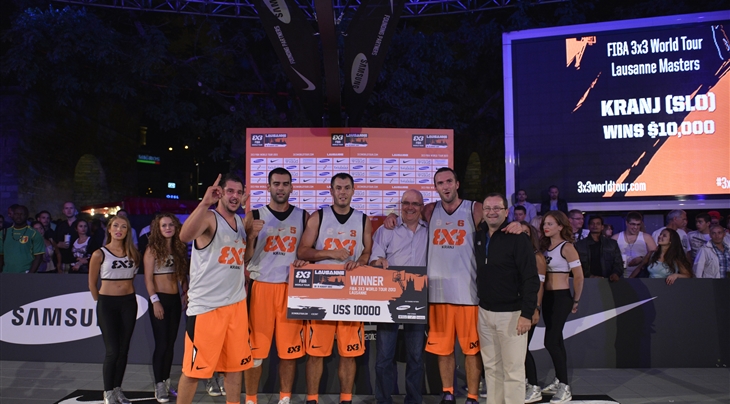 LAUSANNE (3x3) - There was no stopping Team Kranj, the Slovenian side that won all six of their games including a thrilling 100% Slovenian final at the FIBA 3x3 World Tour Lausanne Masters over the weekend.

Slovenia is commonly nicknamed the "Switzerland of the Balkans". Perhaps this explains why Team Kranj and Brezovica felt right at home in front of a large Swiss crowd on Friday and Saturday.

Following their trip to the quarter-finals at the FIBA 3x3 World Tour Madrid Masters last year, Team Kranj arrived in Switzerland with high expectations. After all, they had enjoyed a successful 3x3 summer, winning the Tallinn Challenger and the final of the Slovenian quest, against two of the players from Team Brezovica.

How many cities with a population of 50,000 people can lay claim to have given birth to two former NBA players? Gregor Fucka and Marko Milic used to be the stars in town and Dario Krejic, Jaka Hladnik, Mensud Julevic and Jure Erzen may just pick things up from there.

The team was on cruise control in their first five games, never conceding more than 12 points and when they found themselves trailing 19-17 in the final, they turned to Hladnik - who came in as a substitute for Boris Jersin who tore his Achilles in August - who scored a momentum-changing two-pointer while being fouled. A few moments later, veteran Dario Krejic sank the 10,000 USD free-throw.

It was an odd moment for Brezovica who spent the whole summer travelling all over Europe to secure qualification for the FIBA 3x3 World Tour, only to succeed just a week before the Lausanne Masters at the FIBA Europe 3x3 EuroTour GAM3 National Finals in Denmark.

"Three weeks ago, we were thinking of giving up so if someone had told me back then we would reach the final and qualify for Istanbul, I would have signed immediately," admitted former (5x5) Slovenian international Ales Kunc.

His team-mate Blaz 'Birdman' Cresnar enjoyed some fame with the local crowd, his 2.16m height visibly getting a lot of attention. His power dunks - including a proper poster dunk in the semis on Belgrade's Ivan Popovic - ranked among the highlights of the tournament.

Speaking of Popovic, the red-haired shooter had his moment of glory as he hit a game-winner in overtime in the pool stage against Nice. Team Düsseldorf's Marc Rass also turned heads with his shooting as he dominated the Samsung shoot-out contest, nailing a long ball from the end of the 3x3 court in the process.

Big man Jone Lopes Pedro got the crowd to its feet as well as he completed an alley-oop in the pool stage against Brezovica and climbed on top of Mount Blanc to swat a Kranj shot in the quarter-finals.

His dunks were impressive but not nearly as much as those of Maciej Paprockis and Kevin 'Kap' Hemy. Dmitry 'Smoove' Krivenko was on another level, adding a degree of difficulty with every one of his dunks as he won the SIL dunk contest final. He would always start with an over-the-head alley-oop pass to himself and then went reverse style, between the legs and as a final touch behind the back before slamming the ball inside the rim.

The Ukrainian falcon wasn't the only one who had left his cage. So had the bewitching cheerleaders from the Canary Islands.

The 'Lucky Jeans', a local hip hop crew, and some of the best breakdancers in the world electrified the crowd, who responded well during the weekend initiating a few 'waves', taking the official #3x3WT hashtag to Twitter and Instagram and celebrating together with the players during a memorable after party.