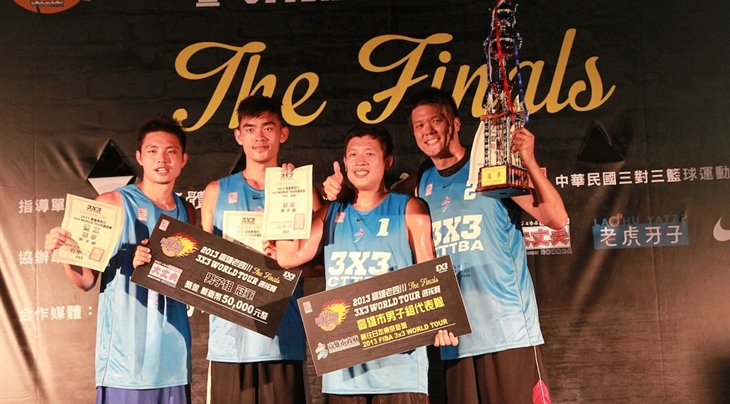 KAOHSIUNG (3x3) - The winners of the Chinese Taipei 3x3 national quest final lived up to their status to qualify for the FIBA 3x3 World Tour.

"Coming into this qualifying tournament, we were considered among the favourites to win," Team Kaohsiung captain Wei-Fan Shang explained.

"And we definitely felt the pressure every time we stepped on the court."

"We came really close with the team who went to World Tour last year. In fact we only clinched victory on a two-point shot in overtime...I was really glad we were able to find the right strategy and deliver in the critical moments."

The mere fact Wei-Fan Shang's men defeated a team which finished fourth at the 2012 Vladivostok Masters - after a memorable win against the New York Rucker Park team - speaks volume about their chances to shine at the Tokyo Masters on 20-21 July.

They will be led by Wei-Fan Shang and Hsiao, two former professional players, Nan-Kuei Wang, a current first league player and the talented Yi-Tsung Chu, another first league player, who represented Chinese Taipei at the FIBA Asia 3x3 Championship in Qatar on 15-16 May 2013, reaching the quarter-finals.

"I wasn't used to the rules back then and missed many opportunities," the 26-year-old explained, "but this time we are ready."