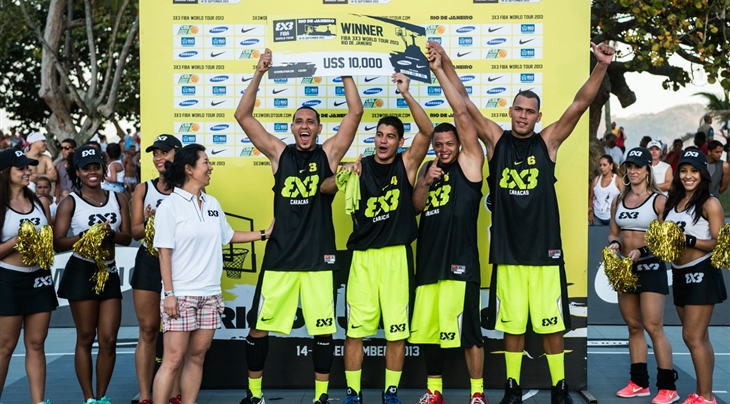 Legs twisted like a flamingo and body buzzing like an alarm clock, 'passinho' ('little step' in Portuguese) dancers were everywhere to be seen during the FIBA 3x3 World Tour Rio Masters. The new dance craze may come Rio's favelas but Team Caracas seemed to embrace the style with their 'microwave' game, making 'little steps' towards the title with every game.

Things started off on the wrong foot though for Caracas, with a painful overtime loss in the pool stage against the local Rio team, just after an initial win against SP Sul. They would then elevate their game with every match, beating teams from all over South America (Uruguay, Brazil and Argentina) in the knock-out stage.

With 44 total points, Michael Flores was the top scorer of the tournament, sharpshooter Edgar Sifontes ending third in that category (28 points). It was definitely Caracas' weekend as their super sub Rafael Melgarejo - who turned 22 on the eve of the tournament - dominated the Samsung shoot-out contest.

For some time, it looked as if the Argentinian city of Neuquen would achieve a prodigious repeat performance at the World Tour. Last season, a Neuquen team led by Bruno Gelsi and Luciano Saborido kept a clean record all the way to a famous win at the 2012 FIBA 3x3 World Tour Sao Paulo Masters.

Now turned tournament organisers, Gelsi and Saborido were in attendance in Rio, watching the winners of their event, spearheaded by the Fabi brothers, prevail in their first five matches, eventually losing 18-13 to Caracas in the final.

Both teams earned their ticket for the FIBA 3x3 World Tour final in Istanbul in just three weeks time, on 4-5 October 2013.

It was a beautiful weekend for 3x3 basketball, which started with a killer venue in the heart of Aterro do Flamengo, just a few 'passinhos' away from the beach, under the palm trees, with the iconic Sugarloaf mountain on the horizon.

There were plenty of highlights this weekend with a courageous Paysandu Team making a 15-hour-journey to Rio and arriving at the 'Cidade Maravilhosa' just two hours before the start of the games, and fighting heavy legs to qualify for the quarter-finals for one microscopic point.

The two finalists had their share of adrenaline with Caracas being involved in the only two overtime situations of the event, winning the latter on a Jovanni Diaz hook shot against a promising Fortaleza (BRA) team starring the second top scorer of the Masters, Davi Rossetto (39 points including a tournament-high nine two-pointers).

Neuquen won a thriller in the quarter-finals against a physical SP Sul team depleted by foul trouble. Trailing all game, the team from Patagonia would end the match with three players against one on the court and secure qualification on a basket with just two seconds left on the clock.

Better not have a heart condition to follow the World Tour in the stands, or a fear of heights as Justin 'Jus Fly' Darlington and his inhuman 1.27m vertical, almost touched the Sugarloaf Mountain at the Nike dunk contest final. His succession of dunks over a 2.07m-tall man and his signature cartwheel slam had the fans roaring, nearly as much as when the Brazilian superstar and NBA player Leandro Barbosa paid the World Tour a visit and went to greet his fans.