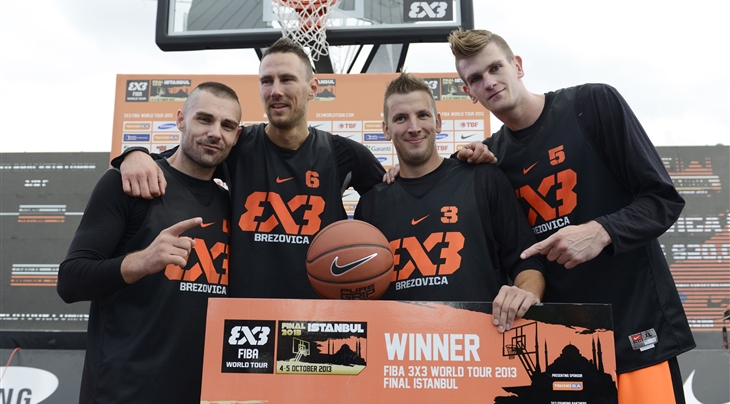 They had traveled from their native Slovenia to Czech Republic, to Russia and Switzerland in vain. They entered the World Tour at the eleventh hour, winning the 3x3 EuroTour 2013 GAM3 National Finals in Denmark, only five days before the Lausanne Masters.

They had blown up a chance to win 10,000$ in Lausanne, bricking several shots in the money-time, only to see their fellow countrymen from Kranj hit the jackpot from the free throw-line.

This time in Istanbul, Team Brezovica dominated from start to finish, taking a revenge win against Kranj in the process and finishing the business in the final (19-13) against Team Novi Sad (SRB).

It was a clash of styles between the Novi Sad players, all growing their beard until they become the #1 players in the 3x3 individual world rankings and all four members of Team Brezovica sporting a mohawk in tribute to their star player, Blaz 'Birdman' Cresnar.

At 2.17m, Blaz Cresnar was an unstoppable force in the paint, finishing the tournament third in scoring (6,8 points per game). In fact, only Rafal 'Lipek' Lipinski could climb the mountain, dunking over the Birdman as he won the TBF Dunk contest final.

Brezovica had plenty of experience to build on, with Rok Smaka (33) hitting several clutch shots off the bench in the final, Jasmin Hercegovac (36) showing his pretty stroke from behind the arc, winning the game in overtime against Saskatoon (CAN) in the pool stage and the Tim Duncan of 3x3, Ales Kunc, a two-time Eurobasket participant, who at 40 is bringing kids back to school in the paint.

The World Tour final provided plenty of highlights with top scorer Dusan Domovic Bulut aka ‘Raging Bull’ mesmerising the packed bleachers on a genius game-winner in the semi-finals, crossing the ball over then nailing the in-your-face step-back two-pointer.

Fandi Andika Ramadhani was shooting long balls like free-throws at the Samsung Shoot-out final and it seemed like Jakarta had remained the capital of 3x3 for another week.

While Ramadhani excelled, the man behind the wheels triple excelled. There was no stopping DJ XXXL as he made a show of the team presentations and dropped some of the best beats of the World Tour season.

Team Bucharest brought plenty of roaring fans but how many of them were 4 times NBA All-Stars? Team Caddebostan (TUR) who qualified through the Nike 3x3 Battle, staged in Istanbul, two days before the event, indeed got a marquee supporter with Kevin Durant sending them a congratulations tweet, and meeting them, wishing them all the best before the quarter-finals.

The FIBA 3x3 World Tour could not find a better location than Istanbul, a city built on two continents for this battle of the worlds, where Caracas (VEN) challenged Europe’s 3x3 supremacy beating Novi Sad in the pool stage and finishing 3rd or Saskatoon (CAN) defeating Kranj and pushing the eventual winners to overtime on Day 1.

After stopping in Tokyo, San Juan, Prague, Lausanne, Rio de Janeiro and Istanbul, the FIBA 3x3 World Tour comes to an end but the 3x3 season goes on.

Team Brezovica not only won the 20,000$ cheque in Istanbul, they also clinched the first spot in the first-ever FIBA 3x3 All-Stars, coming soon on 12 December in Doha, Qatar and whose prize money and appearance fee will reach a grand total of 120,000$.