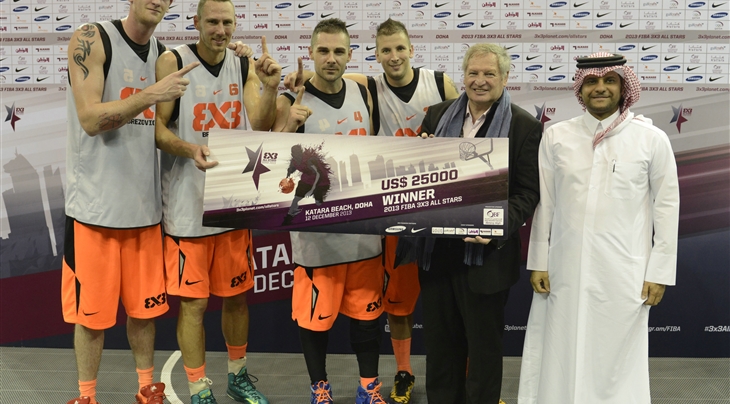 DOHA (3x3) - All the "number ones" in 3x3 basketball hit Katara Beach with the Qatari capital skyline on the horizon.

But neither they nor the guest team of former FC Barcelona players could stop the number one team at the 2013 FIBA 3x3 World Tour from Brezovica (SLO).

After defeating Nagoya and Doha in the pool stage, then Caracas in the semi-finals, Brezovica were up for a rematch of the 2013 FIBA 3x3 World Tour final in Istanbul against their archrivals from Novi Sad.

Team Brezovica (Hercegovac, Blaz Cresnar, Ales Kunc and Rok Smaka) could not have hoped for a better star treatment as all their games were broadcasted live on Slovenian television.

It almost felt like they were playing at home anyway as the local kids from the Birla International School - which they had visited the day before as part of a programme organised by the Qatar Basketball Federation (QBF) and FIBA - came in numbers to support their new idols to the sound of "Bre-Zo-Vi-Ca".

More than a new title and a coveted 25,000 USD winning cheque, Brezovica solidified their status as the best team in 3x3 basketball this season and their star player Blaz ‘Birdman’ Cresnar (2.16m) should become the new number one 3x3 player in the world when the 3x3 Individual World Ranking is updated again next Monday.

Just behind Novi Sad, the frequent flyers from Caracas made another around-the-world journey to Doha to capture third place.

Team Doha made the home fans proud with the lanky Yaseen Musa (2.03m) finishing top scorer of the competition and his team only surrendering in overtime in the semi-finals.

The FIBA 3x3 All Stars was also a matter of big dunks with QBF Dunk Contest winner Kristaps Dargais from Latvia hammering the reverse between-the-legs jam and a big windmill and the Face Team, a crew of acrobatic dunkers from Hungary, flying as high as the vertiginous towers of downtown Doha, to the delight of the numerous fans who came to see the show.