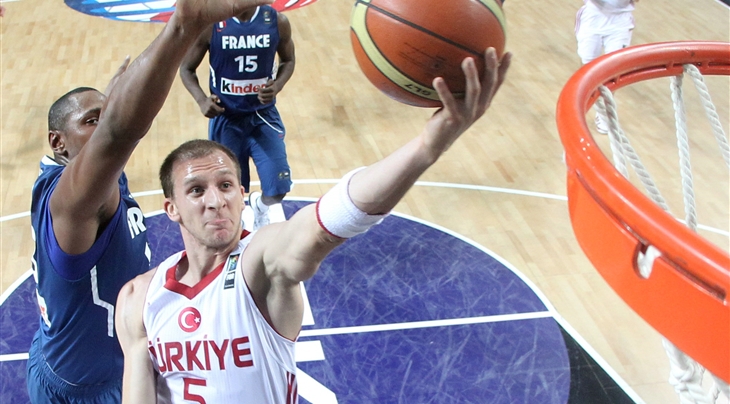 ISTANBUL (3x3) - For the second year in a row, the FIBA 3x3 World Tour is back in Istanbul, this time for its grand final on 4-5 October 2013. We caught up with someone who knows the Turkish city like the back of his hand.

Sinan Guler, a silver medalist with Turkey at the 2010 FIBA World Championship, was born, grew up and still plays in the city where East meets West. His tips include where to play 3x3, where to have coffee…and how to win the 3x3 World Tour final in Istanbul.

FIBA: Sinan, the FIBA 3x3 World Tour will have its grand final in Istanbul this year. How good of a location is it to have a big outdoors sporting event like the FIBA 3x3 World Tour final?
Guler: Istanbul is a very unique city. It is one of the places with the most history in the world. For me who grew up and am a part of this city, I am glad basketball is growing in such a way here and I am happy that Istanbul and Turkey are embracing basketball and 3x3 like that.

FIBA: How much of a basketball city is it?
Güler: It is growing exponentially if you look at the history. From the first time a basketball court was built in Boğaziçi University close to 100 years ago to Turkey's win at the 1987 Mediterranean Games with my father on the team, basketball has gone a long way. You see so many kids playing on the courts here. Istanbul also has one the biggest rivalries in football which has been extended to basketball since the clubs are the same.

FIBA: You are a true citizen of Istanbul. Can you let us know where you grew up and what was your local playground?
Guler: I was born in downtown Istanbul, in an area called Sisli. When I was two, my family moved to another part of the city called Bebek, where I have lived for the last 27 years. The closest playground these days was just outside of the gym of my basketball team. I played a lot on the playgrounds growing up, especially in Etiler, which was just a 15-minute walk away from home.

FIBA: Where are the best playgrounds to play 3x3?
Guler: The best playground is in Caddebostan, on the Asian side of the city, close to the coast of the Sea of Marmara. It is nice for the location itself but mostly because it has established itself as the landmark for streetball in Istanbul with a lot of 3x3 tournaments there in the last 20 years.

FIBA: Can you tell us about your involvement in 3x3 events during the season?
Guler: You can say I am some sort of ambassador for the Turkish Basketball Federation's 3x3 Unibasket tournament (which saw Team Atsanat win the final on 14 May). Together with my dad and my brother, I have created Güler Legacy, which is a sports organisation that sets up basketball camps and is part of the Unibasket organisation. I try to be a part of the programme when I can.

FIBA: What are the things that caught your eye while watching 3x3?
Guler: The competitiveness of basketball on the street is very intriguing. The basketball is exciting. I played basketball on the street, in Turkey and also the US where I spent my college years. There is a lot to learn from the toughness on the playgrounds. The 3x3 rules make it a lot exciting as well. They keep the game safe but at the same time carry the soul of basketball.

FIBA: Iconic locations are a must in 3x3 events and we can install a court anywhere. Where do you think would be the ideal locations for such an event in Istanbul?
Guler: The Old City (Sultanahmet) would be a great choice. It carries the history in the old walls that date back 8,000 years and the future of modern Turkey.

FIBA: The World Tour gathers teams of four players - regardless of their nationalities - representing a city. If you had to assemble the best Istanbul team possible, who would be your three team-mates?
Guler: (Immediately) I would take my brother Muratcan and then…(hesitating) I would need two bigger players…I would take (Serbian international and Anadolu Efes SK team-mate) Dusko Savanovic and (Turkish international and NBA player] Omer Asık. It would be an easy win with that team!

FIBA: For those who will visit Istanbul during the World Tour final, what are the places you would recommend to have a nice stroll or a coffee outside?
Guler: Bebek - the neighbourhood where I live - is the best place to have a nice walk. There are lots of cafes to sit down and relay. Hopefully the fans attending the FIBA 3x3 World Tour will have time to do some sightseeing!