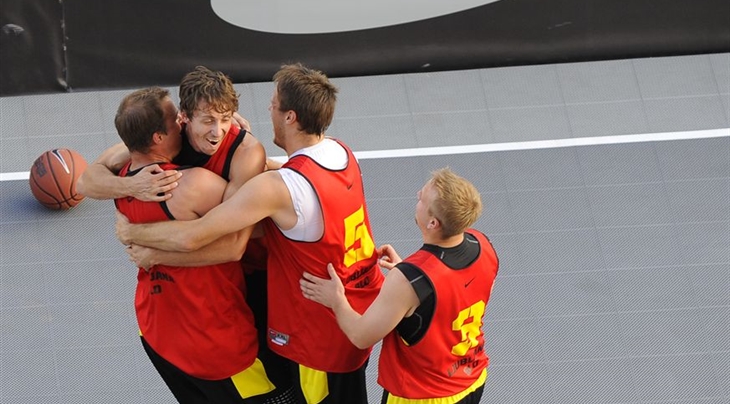 PRAGUE (3x3) - Team Ljubljana (SLO), who feature three players tied at 1st place in the 3x3 World Ranking will meet Team Vilnius (LTU), against whom they have lost twice at the FIBA 3x3 World Tour last year, in addition to Gdansk (POL) and Jelgava (LAT) in the pool stage following the ranking-based seeding of the FIBA 3x3 World Tour Prague Masters.

The stakes are high for Team Ljubljana who have already won no less than five 3x3 tournaments this summer and could secure the first place in the 3x3 World Ranking in case they win the Prague Masters.

Their quest will start at noon on Saturday 14 August against Team Jelgava. They will then cross swords in Pool A with Team Gdansk and finish the pool games with a much-anticipated rematch against their own nemesis Team Vilnius (LTU), who have defeated the Slovenian team twice at the 2012 FIBA 3x3 World Tour, in the pool stage of the Madrid Masters and the Miami Final (on 7 and 22 September 2012 respectively).

Nearly a year ago, Angel Santana led Team Bucharest (ROU) to victory against Bratislava (SVK) in the quarter-finals of the 2012 FIBA 3x3 World Tour Istanbul Masters. The two teams will meet again in Prague.

Leningrad* (RUS) and Istanbul (TUR) are the two remaining teams in Pool B.

Pool C could prove to be even more loaded with Team Novi Sad (SRB) featuring three players who struck gold with Serbia at the 2012 FIBA 3x3 World Championships, making their World Tour debut.

They will have to deal with St Petersburg, who finished 5th at the 2012 FIBA 3x3 World Tour Madrid Masters last season, Team Kaunas (LTU) and Team Ostrava (CZE), who will no doubt get support aplenty from the local crowd.

The top-two placed teams from each group and the two best third-placed teams advance to a standard knock-out round which starts at the quarter-finals stage, on Sunday.

*Two teams from St Petersburg qualified for the Prague Masters. One of them opted to play under the historical name of 'Leningrad'.