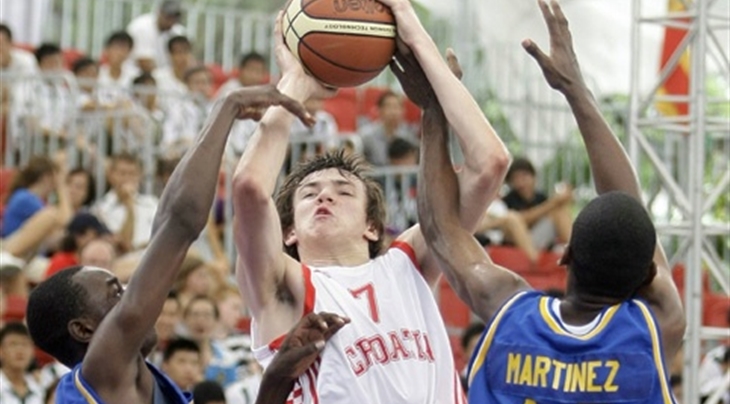 ZADAR (3x3) - A 3x3 silver-medalist with Croatia at the 2010 Youth Olympic Games in Singapore, Marko Ramljak had a breakthrough season in 2013 with KK Zadar and added more silverware to his personal collection by being named the Defensive Player of the Year in the Croatian League.

The 20-year-old talked to FIBA about the legacy of his international 3x3 tournaments on his young career and how it made him hungry for more.

A couple of days have passed since his KK Zadar were swept in the Croatian League finals in three straight games by Cibona Zagreb and the athletic small forward shows maturity beyond his age when looking back at the season.

"From a collective point of you, we achieved our goal," he said.

"We reached one of the top three spots in the Croatian league which qualifies for the Adriatic League. Getting to the Finals was a fantastic achievement. I wish we had won at least the one game at home but it was still a good season for us."

The youngster played a big role in his team's success, seeing his playing time skyrocket from 17 to 28 minutes per game and contributing close to 10 points, 5.0 rebounds, 2.0 assists and 1,5 steals per game.

"I believe I could use my minutes on the floor much better," he said.

"But I think I did not disappoint the coach (Ante Nazor).

More than his stats, his defensive prowess caught the eye, securing him the title of best defender in the league.

"I'm flattered by the award," Ramljak acknowledged. "But ultimately I want to become an all-around player and contribute more offensively while continuing to play good defense."

The Posušje natives and sports fans are sometimes known as the horned vipers (a wordplay to do with the venomous snakes most common in the region) and the rising star sure is no exception.

With an athletic and viper-fast style of play, Ramljak was meant to feel at home on a 3x3 court - and he confirms this.

"I really liked the fact of playing fast. It was a big plus for me since I always play up-tempo. You have to think quickly and improvise a lot when you only have 12 seconds to score."

His first 3x3 experience dates back to the 2010 Youth Olympic Games in Singapore - which coincidentally was the first time 3x3 was played on the international stage and it left an indelible mark on him.

"It was a fantastic experience, almost indescribable," he recalled.

"At first I did not know what would happen. I remember I was not sure if I should go but now I know how much I would have missed. The organisation was great. It was such a big event and 3x3 was a big part of it.

"It was amazing to be among so many great athletes. Getting the silver Youth Olympic Games medal was the icing on the cake obviously and to this day I am still in touch with the guys I met in Singapore through the social networks."

One year later, he put on Croatia's checkered jersey again at the first-ever FIBA 3x3 U18 World Championships in Rimini, Italy, but without the same level of success though as they were knocked out in the group stages.

Involved every summer with the Croatian youth national teams, Ramljak has not had a chance to play 3x3 tournaments since then. On 18 July he will sadly have to miss the 3x3 tournament in Zadar as he will be competing at the U20 (5x5) European Championship in Estonia.

However the news that a bid was made for 3x3 to be included at the 2016 Rio Olympics had Ramljak thinking.

"Honestly I have already spoken about this to my friends. I was hoping that since I already played twice 3x3 for Croatia, I would be considered to play," he argued.

"I can definitely imagine myself playing there. It would make me proud to have the honour to represent Croatia at the Olympics."