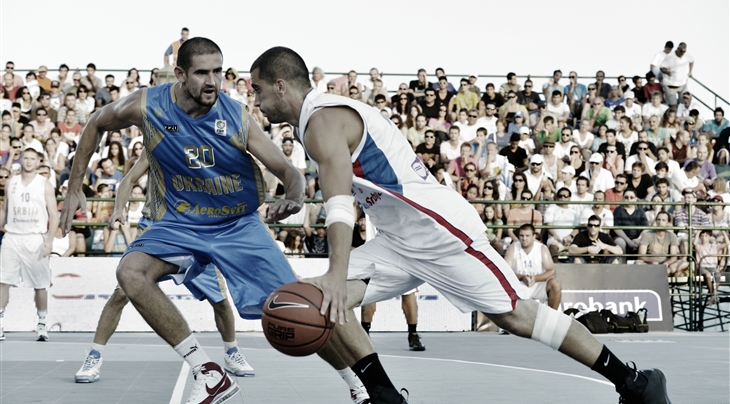 PRAGUE (3x3) - The Czech capital is all set to stage the Prague Masters which will see 11 of the top 20 players in the 3x3 world ranking go toe-to-toe in the heart of the city and all the action can be followed via our livestream on 3x3worldtour.com on Saturday and Sunday.

A toe injury prevented Lukas Kraus from qualifying for the event but the 29-year-old who represented Czech Republic at the FIBA 3x3 World Championships last year said he would not miss any of it.

"In a way I'm happy that I can't play. I'll have more time to enjoy the action," said 'Gigi' who was named one of the ambassadors of the event.

"I find it cool that Prague can organise a stage of the (FIBA 3x3) World Tour. I expect a lot of people to stop by and a huge atmosphere."

It isn't exactly a wild guess as the 3x3 court was built right on the ever-crowded Wenceslas Square with the iconic National Museum offering the perfect backdrop to the event for the local fans (who are granted free entrance) and for the other 3x3 lovers watching the livestream on 3x3worldtour.com from 12:00 to 18:50 (CET/local time) on Saturday 24 August and 14:30 to 20:30 on Sunday 25 August.

"They are pretty good players and I hope these guys can at least qualify for the quarter-finals. But I know the Serbs who excel at playing 1x1. They're too good!"

In fact, the Prague Masters could be one of the toughest stops of the 2013 FIBA 3x3 World Tour with three of the four players who struck gold with Serbia at the FIBA 3x3 World Championships in Greece last year making their World Tour debut, representing Novi Sad.

It won't be first time lucky for Teams Vilnius, Bucharest, Bratislava, St Petersburg, Kaunas and Ljubljana who all have World Tour experience under their belt, the latter finishing fourth at the FIBA 3x3 World Tour Final in Miami and starring three players who are tied in first place of the FIBA 3x3 World Ranking.

Their leader, Simon Finzgar, confirmed the Slovenians are not coming to Prague for sightseeing.

"We are very motivated because this year did not go as planned. We know that if we don't qualify for the Istanbul final, our season is practically over," he declared.

The season may not have been perfect but the team still had an impressive summer, winning no less than five 3x3 tournaments.

Another team which will be motivated is Team Ostrava, the only Czech team playing in Prague.

Their star player Jan Stehlik explains: "There is some rivalry between Ostrava and Prague, mostly in football, but we hope we'll have a big support from the crowd, as the only Czech team in Prague. Our preparation went well and we had small practices with the 3x3 national team coach. We feel at home and we want to do well."

Team Ostrava will try to avenge their narrow two-point loss at the Moscow Open against Team Novi Sad. Team Kaunas and St Petersburg will also feature in Pool C reviving an old rivalry between Zalgiris and Spartak in basketball.

Team Bucharest will highlight Pool B and meet again with Team Bratislava, whom they defeated last year in the World Tour at the Istanbul Masters.

Speaking of which, an Istanbul team will complete the pool with a second team from St Petersburg playing under the name of Team Leningrad.

Old pals will cross swords again in Pool A as well where Team Ljubljana will face their old nemesis Team Vilnius, who upset them twice last year at the World Tour in the pool stage of both the Madrid Masters and the Miami Final. Team Jelgava and Team Gdansk will be the underdogs to advance to the quarter-finals, which bring together on Sunday from 15.30 the two best-placed teams of each pool and the two best third-placed teams.

Not only will the fans watch some of the best 3x3 action, they will also have a chance to see the Samsung shoot-out contest (final at 17:40) and some of the best dunkers (which include two of the best European dunkers Lukasz Biedny (POL) and Kristaps Dargais (LAT)) defy gravity at the dunk contest final at 19:10.

Both the dunk contest final and the Prague Masters final will be broadcasted live on national television, showing how much the Czechs are looking forward to the event.

The celebrities game on Sunday at 14:35 will provide plenty of eye candy with models Hana Maslikova and Eva Decastelo stepping on the court. MC Martin Chotas and 'Poeta' will team up with DJ Cut Dem to entertain the crowd, which is likely to be amazed by 'Art Edition', a popular local troop of dancers.