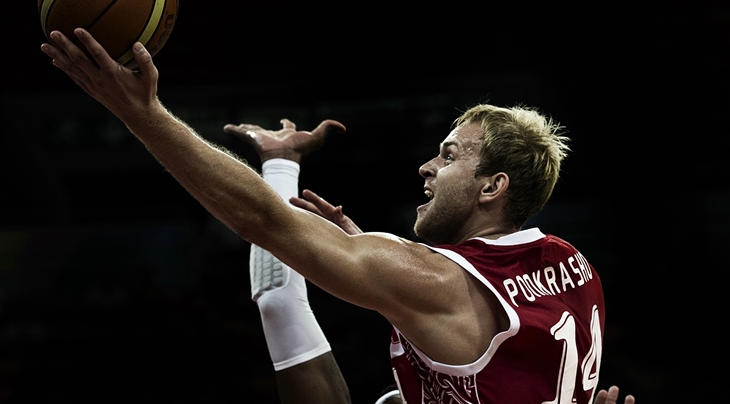 MOSCOW (3x3) - Anton Ponkrashov, the 2012 Olympics bronze medalist with Russia, was one of the main attractions at the 3x3 Moscow Open last weekend.

Really the 27-year-old was not supposed to be there. Shortly after terminating his contract with CSKA Moscow, the versatile playmaker was back in his native St Petersburg practicing with his friends.

"We were playing with my former team-mates from my junior years," the EuroBasket 2007 winner recalled, "and then I accidentally broke my friend (Alexandr Pavlov)'s finger in practice.

"He was one of the players of that St Petersburg 3x3 team who was invited to play at the 3x3 Moscow Open. Therefore the guys told me I should go with them. Since I was free and out of contract, I thought yes I should go."

Ponkrashov hardly could have dreamed of a harder initiation to 3x3 as he was assigned the task to face as soon as the group stage a Croatian team featuring the top 3 players of the 3x3 World Ranking and the reigning FIBA 3x3 World Champions from Novi Sad, Serbia.

"It was a great tournament with a perfect organization and a lot of great players," he said.

"It was a big surprise for me. I wasn’t expecting that level of talent!"

Olympic medalist or not, his efforts were not enough to lift a team who already secured qualification for the 2013 FIBA 3x3 World Tour (in Prague) following their win at the St Petersburg challenger. "There are three reasons why we lost," he explained.

"First it was my first time with the team and so we didn’t know each other well. Second, I wasn’t necessarily prepared. I just took the first plane to Moscow and played. Finally we fought till the end but we simply lost against a great team (Iguana)."

Of all things 3x3 has to offer, the intensity of the games is what will remain the biggest shock of this 3x3 experience:

"On the first match, after 3 minutes, I thought ‘easy game’. After 6 minutes, I was so tired I realised I wasn’t ready for that. After 3 games, I was dead."

At the end of the day, the Ljubljana team who reached the semi-finals at the 2012 FIBA 3x3 World Tour featuring Adin Kavgic, Gasper Ovnik, Rok Vrecic and tournament MVP Simon Finzgar prevailed and stamped their ticket to the 2013 FIBA 3x3 World Tour Prague Masters.

Ponkrashov was left hungry for more. "I am happy I played," he said "and I hope I can play again next year." The new deal the left-hander inks this summer may play a big role in his future 3x3 appearances but expect the 2-metre tall point guard to be even more tempted when Moscow stages the 2014 FIBA 3x3 World Championships next June.