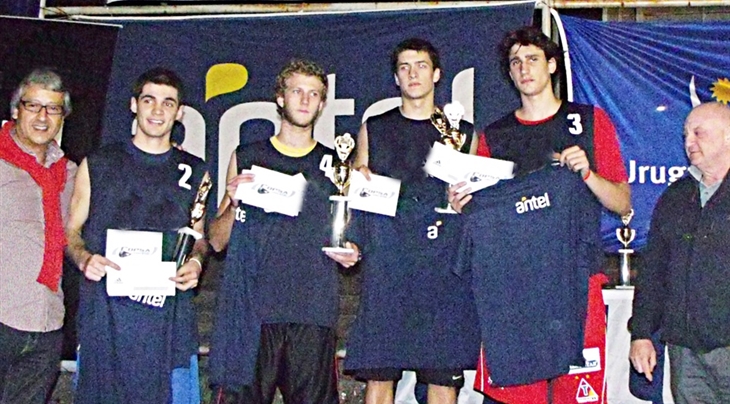 MONTEVIDEO (3x3) - Luciano Parodi helped his team win the first edition of the Tour Nacional de Básquetbol 3X3 Uruguay. The 19-year old, who plays point guard in the Uruguayan first tier with Hebraica y Macabi and the youth national teams, looks back at his first 3x3 success, with a band of friends. 'La triple amenaza' (featuring Hernando Caceres, Andrew Dotti, Gabriel Rezzano and Parodi) is the first team to qualify for the Rio Masters, the fifth stop of the FIBA 3x3 World Tour on 14-15 September and the Paysandú native promises he will attempt “to make [his native city] proud."

FIBA caught up with Parodi to talk to him about the tournament and what makes 3x3 so special to play.

FIBA: Luciano, congratulations on your success. How did you feel about winning the tournament?
Parodi: I'm very happy with our victory in the 3x3 Uruguay Tour because we are a group of friends who are studying together. It was great to be able to play together and be lucky enough to win.

FIBA: How hard was it to win it all?
Parodi: It was very hard. There were some very good teams [note: including Team Montevideo, who participated in the 2012 FIBA 3x3 World Tour and currently have two players sitting in the top 25 of the 3x3 world ranking]. It was a high-level competition but the more we were playing the more we believed in our chances. We motivated ourselves and eventually won the title.

FIBA: How do you feel about representing your city in Rio?
Parodi: We will be representing Paysandú because three of us are from there. I am very happy and honoured about this. We will try to do our best to make Paysandú proud.

FIBA: What are the most exciting things about playing 3x3?
Parodi: The most exciting part for me was to have a chance to play basketball with my friends. About the game itself, it has more one-on-one feel. It comes from the streets and is just a lot of fun.