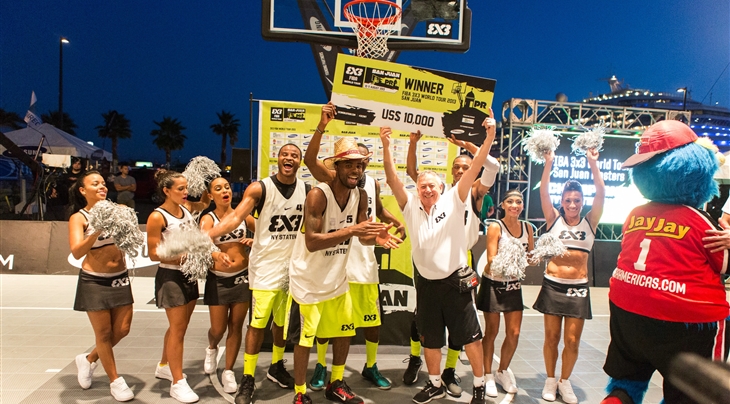 SAN JUAN (3x3) - The team from Staten Island, New York’s least heralded basketball borough, challenged stereotypes by stamping their ticket to the FIBA 3x3 World Tour Final, where they will be joined by Team Saskatoon.

You could tell by looking at team captain’s Zaire Taylor’s back that representing the borough meant the world to him. The tattoo says ‘NYSI’ in tribute to New York Staten Island.

After knocking out Denver, the best US team in the 3x3 world ranking, in the quarter-finals, the undersized team wore down an experienced Team Philadelphia in the semi-finals to finally avenge their pool stage loss and beat Team Saskatoon in the final game.

Saskatoon’s unexpected run proved that chemistry is key in 3x3. All four players from crafty point guard Michael Linklater to volume shooter Trevor Nerdahl and the twin towers Michael Lieffers and Troy Gottselig played together in Saskatchewan university during the 2010 season.

The San Juan Masters featured a lot of epic upsets with Denver losing to NY Staten, a Puerto Rican team from Barceloneta beating Montreal in overtime on Saturday with just two men against three players but none were bigger than the reigning FIBA 3x3 World Tour champs being surprised in front of a roaring crowd in the quarter-finals against Team Philadelphia.

Team San Juan’s only consolation prize was Jonathan Garcia’s title at the Samsung shoot-out contest. A fellow Puerto Rican (Luis ‘DZK’ Perez) won the dunk contest final by jumping over a Harley Davidson motorcycle. Closer to the earth, 11 year-old dribbling wizard and Internet sensation Julian Newman became a new local favourite as he showcased his jaw-dropping handles. He even almost won the Samsung shoot-out contest against the pros!

San Juan proved to be a very welcoming host to the FIBA 3x3 World Tour with a numerous crowd and a horde of national icons around the court, from former basketball star José ‘Piculin’ Ortiz to boxing legend Felix Trinidad.

The FIBA 3x3 World Tour now takes the road to Prague, Czech Republic, host of the third Masters of the season (24-25 August). Who will join Team Jakarta, Nagoya, NY Staten and Saskatoon in the Final?