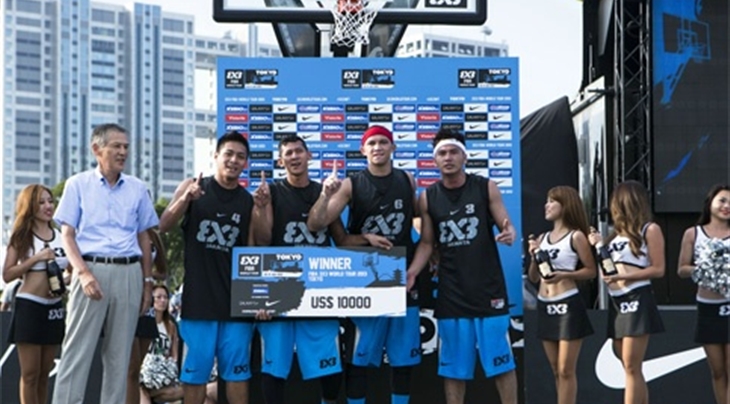 TOKYO (3x3) - On the verge of elimination on Saturday, Team Jakarta improved with every match to stamp their ticket to the FIBA 3x3 World Tour final, where they will be joined by Team Nagoya.

"Honestly I thought we would be out after the first match," Jakarta’s Wijaya Saputra confessed.

That’s the level of confidence Team Jakarta had reached after a mediocre first day that saw them drop two of their three pool games against two Japanese teams from Kawasaki and Tokyo.

But on Sunday, the same wind that slightly disrupted all contestants of the Galaxy shoot-out contest, except winner Ming Hao Liang, changed the whole scenario and Jakarta won the next three games en route to the title. If Jay-Z would have followed the livesteam, he might have called this "My Jakarta Holy Grail."

From the quarter-finals onwards, the Indonesian sides knocked down three teams that were still unbeaten. It started with Fandi Andika Ramadhani nailing an amazing off-balance shot to beat Team Beirut in overtime. The 28 year-old was not done yet as he hit another game-winner at the free-throw line against Team Kawasaki. In the final game, the team found an answer to the talented Tomoya Ochiai and Saputra made some big shots including a huge 2-pointer which he punctuated with a kiss sent to the crowd.

It was a bittersweet kiss for the local fans, who had every reason to hope for a home win with three Japanese teams in the semi-finals. At least for Team Nagoya, the consolation prize is the qualification, together with Team Jakarta, for the FIBA 3x3 World Tour final in Istanbul on 4-5 October. The baby-faced Ochiai showed a great left hand and some jumping abilities, that only Subaru dunk contest winner Rafal ‘Lipek’ Lipinski could match. He may not have jumped over two cheerleaders - like Lipinski did - but he magnetized every rebound like his childhood idol Dennis Rodman.

Team Tokyo looked like a strong candidate for the title as they featured two professional Japanese players - including the silky smooth Yusuke Okada - and two big American imports but the name and the centimetres (all 211 of them for Matthew Kyle) do not guarantee a win in 3x3 as Team Nagoya proved.

3x3 found a new home in Tokyo right in front of the iconic Fuji TV building with full bleachers both days and a great party atmosphere, to which contributed famous comedian Yoshimoto and the most successful players in the history of Japanese basketball in Yuta Tabuse and Yuko Oga who both played professionally in the US, in the NBA and the WNBA respectively.

The FIBA 3x3 World Tour now takes the road to San Juan, Puerto Rico, host of the second Masters of the season. Who will join Team Jakarta and Team Nagoya in Istanbul?