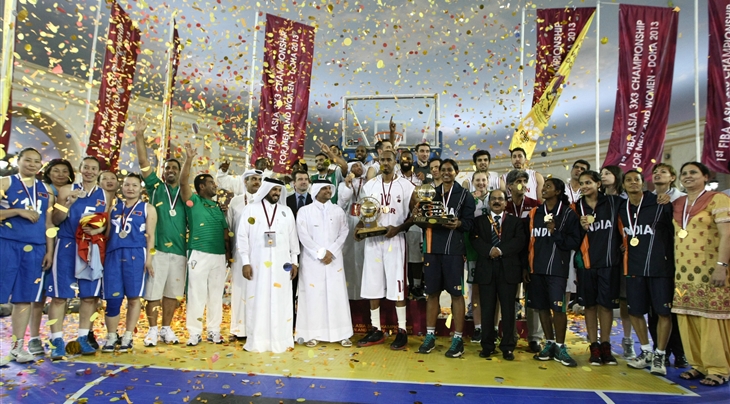 DOHA (3x3) - Tournament favourites lived up to the expectations at the inaugural FIBA Asia 3x3 Championship. The Qatar (Maroon) men's team dominated in front of their home crowd, while India - led by the multi-talented Geethu Anna Jose - absolutely swept away the women's tournament.

Although they finished the event unbeaten, Team Qatar (Maroon) had to sweat it out to earn their title. Led by American-born playmaker Boney Watson, they beat eventual bronze medalists Iran by just three points in the semi-finals, before a narrow two-point win against a surprising Saudi Arabia helped them strike gold.

"It's always fantastic to win in front of your favourite people,” said Team Qatar (Maroon) veteran Yasseen Ismail in the grandiose scenery of the Villaggio Mall.

Meanwhile, India's women had a much more straight-forward road to their title as they won all six of their games, with an average winning margin of over 13 points.

The Asian Beach Games reigning champions won each one of their three knock-out games, reaching the 21-point mark with plenty of time left on the clock. Their 21-14 triumph over Mongolia in the final proved to be their hardest challenge.

"We achieved what we set out to do," said Jose, who was an overwhelming favourite in the All-Stars nominations.

The quality of the event and breathtaking nature of 3x3 was at full display in the women's third-place game as Nigyera Nagiyeva nailed a stunning shot from downtown in overtime to give Turkmenistan an unexpected bronze medal.

3x3 continues to take over Asia next week, from 22 to 24 May in Bangkok as Thailand will host the first-ever FIBA Asia U18 3x3 Championships.