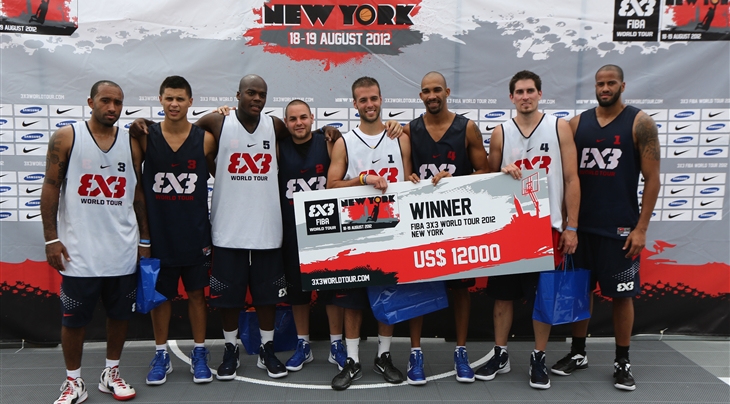 For the 1.91m off-guard, it feels like it happened yesterday.

"We have been thinking about it since Miami," Griffin confessed.

"We still believe we should have beaten Team San Juan. We watched the video of the game we lost over and over again and we saw what went wrong. We had this injury [their big man Patrick Hannaway hurt his knee] and we were so tired."

"They didn't let us play. We lived from the outside and we didn't drive enough. They were efficient in the middle and our defense broke down because of fatigue."

"Their big man [William Orozco] was very talented. He was the best player of the tournament and the rest of the guys fit the profile as well."

"Obviously the highlight of the tournament was Corey Campbell's game-winner in the final," 29-year-old Griffin recalled.

"It's the best shot I've ever seen. Corey is one of the greatest shooters I have ever played with. This basket will stay forever in my memory."

Griffin - who takes pride in being the number one-ranked 3x3 player in the United States along with Campbell - believes he is ready for Act III of the Denver-San Juan rivalry.

"There's a respect between us," the former Calvin College standout said.

"But now I think we are evenly matched-up and we will give them a battle. We want more this year and we feel we can beat this team in their hometown."

While Team San Juan should be the same, Denver will look distinctively bigger this year.

"Patrick Hannaway is out for the year following a knee injury and Chris Holloway left the country for work and could not play. We analysed how we did last year and we thought we would improve with more size," Griffin explained.

"We had multiple try-outs and auditioned ten different guys.

"Domonique Perez is a 2.07m guy but with a 2.15m wingspan. He is very long and blocks a lot of shots while [multiple Red Bull King of the Rock 1x1 event finalist] Derrick 'Peanut' Lemuel is a physical 1.96m guy with a 2.13m wingspan. He is the best on-ball defender we could find. We needed defense. At the end of the day we were just one rebound shy of beating San Juan last year."

After organising a fundraising event on 31 July, Griffin and his team are preparing for the San Juan Masters at the USA Basketball 3x3 National Tournament this week-end.

"We ran, we conditioned, we lifted," Griffin told.

Team San Juan had better be ready if they want to keep their crown.