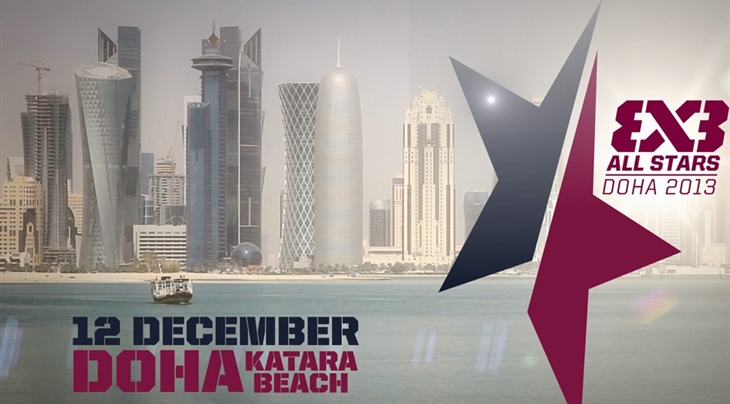 DOHA (3x3) - All the "number ones" of 3x3 basketball will meet on Katara Beach for the first-ever FIBA 3x3 All Stars, in Doha, Qatar on Thursday 12 December.

"It was a long and hard job," said the number one 3x3 player in the world, Novi Sad's Dusan Domovic Bulut, at the press conference on the eve of the event. "We played a lot of tournaments all around the world this year and this is what brought us here."

The number one team at the 2013 FIBA 3x3 World Tour, Team Brezovica (SLO) is back in business, on the wings of the big man Blaz 'Birdman' Cresnar (2.16m). The team's captain, Ales Kunc, was addressing a different crowd than the usual 3x3 fans on Wednesday, speaking at the Doha Goals, a prestigious sports conference.

The number one player in Qatar, Boney Watson, went down with a knee injury just a week prior to the tournament but his team proved to be just fine as Team Doha defeated the sixth and last team of the FIBA 3x3 All Stars, FC Barcelona (ESP) during an exhibition game on Wednesday.

The lanky Yaseen Musa (2.03m) exploded for a thunderous dunk early in the game and sank a clutch corner two-pointer in overtime to beat (17-15) an FC Barcelona team made of former Blaugrana players, including the versatile Rodrigo de la Fuente.

The action starts on Thursday 12 December at 15:00 local time (13:00 CET) with the first game featuring Brezovica (SLO) against Nagoya (JPN) on Katara Beach between the sea and the Roman amphitheatre with the eye-popping Doha skyline on the horizon.

The games can be followed live on www.youtube.com/3x3planet and will be aired worldwide by several broadcasters. The action will culminate in the FIBA 3x3 All Stars final at 19:10 local time (17:10 CET).

The lucky spectators will not only get to see the number one 3x3 players in the world but also witness one of the best dunk contests of the season (at 18:40 local time) featuring FIBA 3x3 World Tour double dunk champ Rafal 'Lipek' Lipinski, Dmitry 'Smoove' Krivenko and Kristaps 'Latvian Sensation' Dargais.

The unstoppable DJ Cut Dem will be on the turntables and the Face Team, a crew of acrobatic dunkers who reached the semi-finals of the TV show Britain’s Got Talent in 2012, promises to bring the FIBA 3x3 All Stars to new heights.