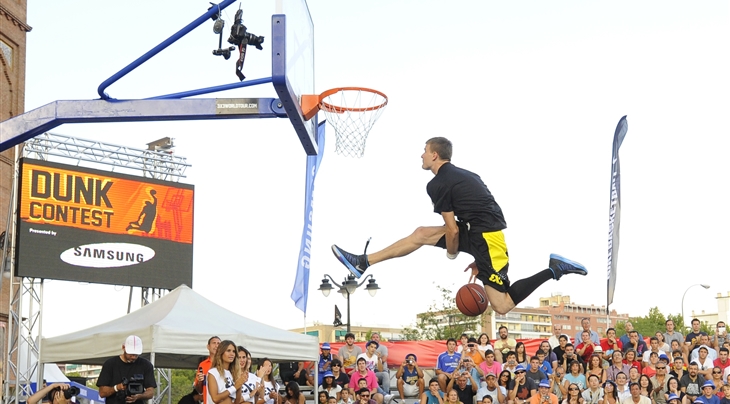 POZNAN (3x3) - FIBA.com/3x3 caught up with Rafal 'Lipek' Lipinski, the winner of the 2012 FIBA 3x3 World Tour final dunk contest, who has worked like crazy to be back in time for the Tokyo Masters on 20-21 July. He announces he will do a dunk "nobody has ever done before".

FIBA: When was your first dunk ever?
Lipek: I was 16 and one of the shortest guys on my team at the time. I can remember like it was yesterday.

FIBA: Who are your biggest influences as a dunker?
Lipek: The first one was not known for being a dunker but it would be Allen Iverson for crossing borders and achieving things against all odds. People told me I would never dunk professionally. If you believe, you just have to do it. The second would be Vince Carter for he was a dunker with a lot of creativity. He was just so dynamic.

FIBA: How does one become a professional dunker?
Lipek: The whole dunking career started by surprise. It was at a tournament in my hometown of Poznan in 2011. I had never been in a dunk contest. I won and people were like ‘wow’. I did a 540-degree dunk, which only two Polish dunkers had done before so I started to get invited everywhere. With Kadour Ziani and the Slam Nation, I got to perform abroad in the summer of 2012, going to Algeria, France, the USA and I got a chance to go to the FIBA 3x3 World Tour and be crowned dunk champion.

FIBA: What would you consider is your best dunk?
Lipek: I did a 720-degree dunk once which very few people except the dunker 'Air Up There' achieved. It is a very hard dunk that looks amazing. Apart from that I have a few signature dunks like the 360-degree between-the-legs dunk and the double pump over a standing man.

FIBA: What are your best memories of the FIBA 3x3 World Tour last season?
Lipek: I was in Istanbul, Madrid and Miami. When I perform, I turn into a showman and try to interact with the audience. I liked the atmosphere in Istanbul. Then going to Miami and win the title was a good memory as well.

FIBA: You suffered an injury last year. How hard did you have to work to be ready in time for the start of the World Tour?
Lipek: Last October I felt a pain in my right knee. I kept practicing and then I heard a crack. I had a torn meniscus. It is a bad memory. I required a surgery and was out for a few months. It was a lot of work to get back in shape. The injury was a great lesson and I now know more about my body and how I should train and behave.

FIBA: How much do you look forward to the Tokyo Masters on 20-21 July?
Lipek: I’m very enthusiastic. It will be my return to dunking on the big stage. I’ve been thinking about it for months. I know I will be ready at this date. I miss this: do my dunks and see the reaction from the crowd. It will be my first time in Asia.

FIBA: What kind of surprises can we expect from you in Tokyo?
Lipek: I always try to do something new. I won’t tell you, you will have to see but I’ll do something nobody has ever done before.