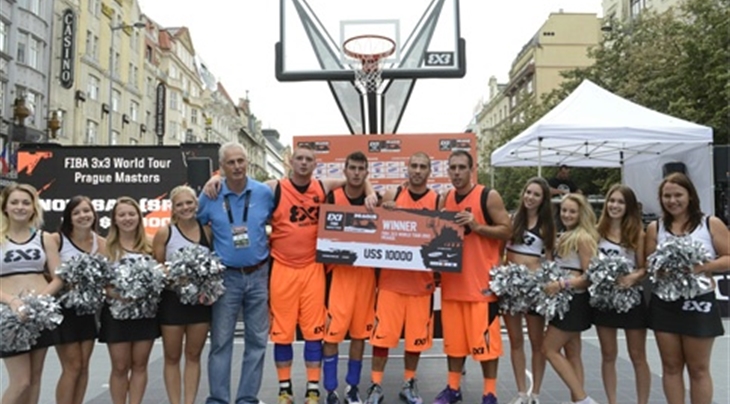 PRAGUE (3x3) - The same team (minus one change) that won the FIBA 3x3 World Championships for Serbia last year made their debut in the FIBA 3x3 World Tour representing Novi Sad this weekend and not even the number one players in the 3x3 World Ranking could stop them from adding another line on their impressive resume.

Such a metamorphosis could only happen in Franz Kafka's hometown. Twice in the pool stage, Dusan Domovic Bulut, Marko Savic, Nikola Ugrica and Marko Zdero tasted defeat, against St Petersburg and on a buzzer-beater versus the 'local' Team Ostrava, which brought the massive crowd to their feet. Maybe it was because of the nine-hour drive the day before, but the Serbians did not live up to their #3 seed.

Team Bucharest had a journey twice as long but looked equally as disappointing and unworthy of their #2 seed, losing their first two matches against Istanbul and Leningrad. The voluble Angel Santana was unusually silent and the squad looked headed for an early exit.

Who would have thought both teams would then bounce back and make it all the way to the Prague Masters final, thereby earning their ticket for the Istanbul Final?

All of a sudden, Santana's shot was dropping, big man Catalin 'Meatball' Vlaicu was turning the paint into Hell's Kitchen, while Catalin 'Tom' Bordei and Alin 'Gipsy' Spahiu were handing out dimes. First on the menu was Vilnius followed by Leningrad. Bucharest becomes the first team this season to secure a return to the FIBA 3x3 World Tour Final after their trip to Miami last year.

The last hurdle proved too hard to clear. Team Novi Sad destroyed a then-undefeated Team Istanbul before downing Ljubljana - a squad featuring three players tied first in the 3x3 World Ranking - who had beaten them earlier this summer in dramatic fashion. Savic looked as solid as a Charles Bridge stone and Domovic Bulut's one-legged fade-away looked as pretty as Hana Maslikova, a Czech model who made a memorable appearance in the celebrities' game. Nobody could stop them at this point and they prevailed 20-15 in the final.

Team Novi Sad wasn’t the only Serbian star on Wenceslas Square this weekend, as fellow countryman DJ Cut Dem had people jumping up and down but no one could sky as high as dunk contest winner Lukasz Biedny who dunked over five men standing (!) and Kristaps 'Latvian Sensation' Dargais who absolutely stunned the crowd with a rim-shaking 360 degree dunk. Another Latvian shined on Sunday as Team Jelgava's Gatis Justovics morphed into a sniper and scored from anywhere - including the end of the court - in the Samsung shoot-out contest final.

The FIBA 3x3 World Tour felt right at home in Prague, in the very heart of the city with the local crowd packing the bleachers and stretching all around the court, with the iconic National Museum offering the perfect backdrop for a weekend of hyper-competitive 3x3 basketball in a party atmosphere.