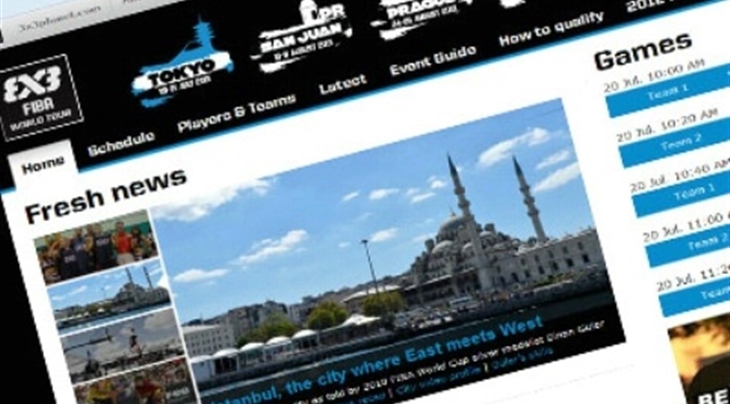 MIES (3x3) - 3x3worldtour.com, the official source of information and news for the 2013 edition of FIBA's 3x3 flagship competition, has been officially launched.

The FIBA 3x3 World Tour sees teams representing cities from around the world qualify for five 12-team Masters events via a worldwide network of qualifying tournaments. The team from San Juan was crowned champion of the inaugural edition in 2012, winning the World Tour Final in Miami, USA, last September.

The new-look website boasts a dedicated page for each of the World Tour's five Masters - Tokyo, San Juan, Prague, Lausanne, Rio de Janeiro - as well as the FIBA 3x3 World Tour Final in Istanbul on 4-5 October.

For each tournament - which also includes individual contests such as a shoot-out and a dunk contest, featuring some of the best professional dunkers in the world - full schedules, group standings and brackets will be made available. Profiles of all participating teams and players are also available.

The road to the World Tour is now explained in detail so that every 3x3 player can find out which local tournaments to register for to make it from the streets to the world stage.

With further information about the second World Tour season - including details about the venues and host cities, a comprehensive blog as well as videos and photos for all events - 3x3worldtour.com is the definitive source for all things World Tour-related.

For the launch, the website features two exclusive interviews. 2012 FIBA 3x3 World Tour champion Andy Ortiz explains what it takes to win the competition and Turkish national team and Euroleague player Sinan Güler gives an introduction to Istanbul, his hometown and host city of the 2013 FIBA World Tour Final.

To make the wait seems shorter before the first games, you can watch the 2013 FIBA 3x3 World Tour promo video.