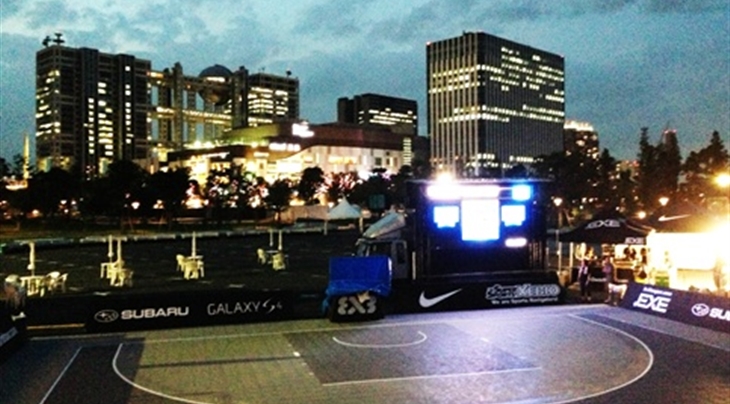 Can Team Vladivostok maintain their supremacy on the Asia-Pacific area? Last season the Russian team prevailed at home beating their compatriots from Khabarovsk.

The task will be harder this year without the support of their local fans and in the absence of key pieces and joint-30th ranked 3x3 players in the world Eduard Sandler and Konstantin Bozhko, both injured.

Team Auckland from New Zealand and Team Kawasaki from Japan will be among the contenders, banking on their common experience at the FIBA 3x3 World Tour Vladivostok Masters last year.

This time it will be Team Kawasaki's captain Keita Suzuki's turn to enjoy a home-court advantage.

"It is a blessing to be able to play an international event in front of friends and family," said the 32-year-old.

The 3x3 court was built in Odaiba, a major commercial and leisure area surrounded by several Tokyo landmarks, the iconic Fuji TV building, the statue of a giant robot known as 'Gundam' and the crowded Fuji TV festival.

Suzuki's side will spearhead a strong contingent of Japanese teams with a grand total of four sides looking to punch their ticket for the FIBA 3x3 World Tour Final in Istanbul on 4-5 October 2013. Both the finalists of the Tokyo Masters will make the trip to Turkey.

The 12 participants will be divided into three pools of four teams with the first game between Team Vladivostok and Team Takao (from Chinese Taipei) starting at 11am local time and streamed live on 3x3planet's YouTube channel.

The pool games will stop around 5:45pm and make way for the quarter-finals, which will bring together the two best teams of each pool plus the two best third-ranked teams on Sunday.

The knock-out stages (with the final scheduled for 4:25pm) will not be the only highlight on Sunday as the Samsung shoot-out contest will bring the best snipers of the tournament and the Subaru dunk contest will see the participation of the 2012 FIBA 3x3 World Tour dunk champion Rafal 'Lipek' Lipinski who last week promised 'a dunk nobody has ever done before'.

The fans in attendance will have a chance to meet several local stars including the comedian Yoshimoto and the only Japanese basketball player to put a foot in the NBA, Yuta Tabuse. Celebrity exhibition games will be staged to the sound of a DJ, with two MCs and a troop of breakdancers making sure the 2013 FIBA 3x3 World Tour kicks off in style.