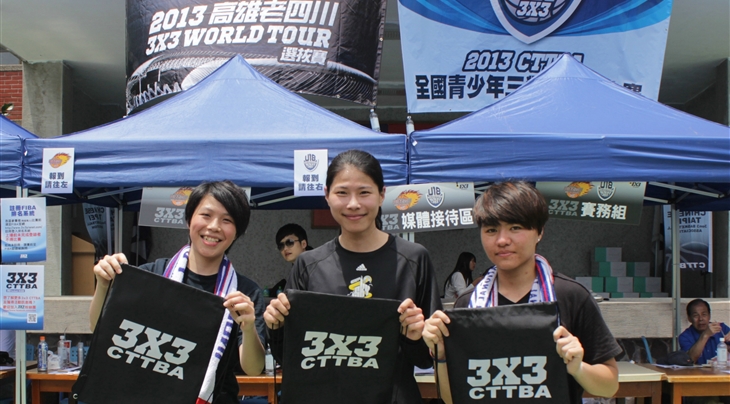 TAIPEI CITY (3x3) - No less than 146 teams took part in the first stage of the Chinese Taipei 3x3 quest on 2 June and among the crowd of professional players, streetballers and even NBA commentators stood Ma Yi Hung and her team who represented the country at the 2012 FIBA 3x3 World Championships for Women in Greece.

The tournament was a chance for the 32 year-old to bring together a team that has proved successful last year as they reached the quarter-finals.

"It was quite a refreshing experience," she explained.

"I get to enjoy these moments with my eldest team-mates and friends which is pretty amazing."

The team got a little help from a certain Wen Chi, arguably the most famous women's player in Chinese Taipei until a career-ending injury forced her to the sidelines three years ago.

The help was more than needed as Ma Yi Hung points out that "it is one of the most competitive 3x3 events in the country I have been to. With the faster pace and time limitation, upsets could happen to anyone. Therefore it requires all players to play at an intensive level at all times, which is thrilling."

That said, there was no stopping Ma Yi Hung's team who won the women's tournament trophy and qualified for the quest final organised by the Chinese Taipei 3x3 Basketball Association on 7 July. A good performance at that event should help the Taipei city native climb up the world ranking (she is already the 40th best women's player in the world).

Ma Yi Hung also stars for Chinese Taipei's 5x5 national team that reached the Semi-Finals of the 2011 FIBA Asia Championship for Women and her presence spoke volume about the popularity of 3x3 on the island.

"I believe Chinese Taipei has the potential to be great in 3x3 basketball," she claimed.

"We don't need a lot of equipment and people for 3x3 and we have a lot of public court that we can use to host 3x3 games. But most importantly, it is a simple game with a lot of excitement."

Ma Yi Hung was also watching as her young compatriots won the FIBA Asia 3x3 U18 Championship for Girls in Thailand on 24 May, something that left her full of pride and hope.

"We were really happy for them and really excited for our country at the same time," she enthused.

"Now many will know Chinese Taipei has solid young basketball players and are able to compete on the world stage against other elite players."