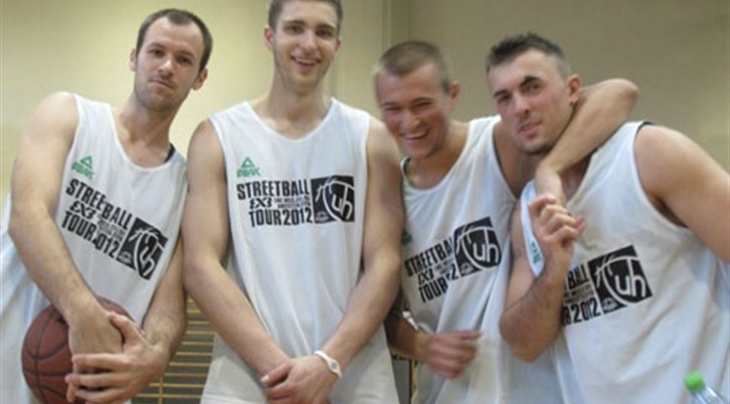 LINZ (3x3) - Austria may not be particularly known for its basketball culture but as it turns out 3x3 is quickly becoming the new trend when it comes to sports.

Urban Hoops held its first event in the beautiful city of Linz, though the event itself took place in a gym due to heavy rain.

However, this didn't stop the 22 participating teams from doing battle over the course of eight hours in front of spectators for the much-sought-after trip to the FIBA 3x3 Qualifier Lausanne (World Tour Challenger) in July.

The 'Hofi's Panzerknacker' team was the winner of the 3x3 Urban Hoops Tour Feeder and took a big step forward in qualifying for the 3x3 Challenger to be held in Lausanne on Sunday 22 July.

The team composed of Georg Rülling, Jürgen Brandtner and Patrick Hofbauer is well aware of what is at stake in Lausanne; winners of that Challenger will automatically qualify for the 3x3 World Tour Master in Madrid, Spain early September.

FIBA.com caught up with Rülling (the tournament MVP) to ask him about his thoughts and impressions on winning the Linz Urban Hoops Feeder.

FIBA: How does it feel to win the 3x3 Urban Hoops Tour Feeder in Linz?

Rülling: It feels great! Last year we lost in the Quarter-Finals so it really felt great to win this event and we played against really good players as well.

FIBA: For how long have you and your teammates been playing 3x3 tournaments together?

Rülling: We've been playing 3x3 basketball for the past eight years together. In 3x3 it helps a lot when you know your teammates since the game is so much faster.

FIBA: Do you play five-on-five basketball as well?

FIBA: What makes 3x3 basketball different from normal five on five and what are its advantages?

Rülling: There's more space so it's very important to have a lot of individual skills like dribbling and stuff like that.

FIBA: What's the level of excitement for you and your team knowing that you might play at the FIBA 3x3 Qualifier in Lausanne this coming July?

Rülling: It was the first step to reach the goal for Lausanne. It's still a long ways away but we know that if we keep fighting and playing tough we can make it.

FIBA: What would your ideal 3x3 team look like?

Rülling: Oh well that's a good question, I think I would go with Brian Scalabrine, Matt Bonner and Greg Ostertag.