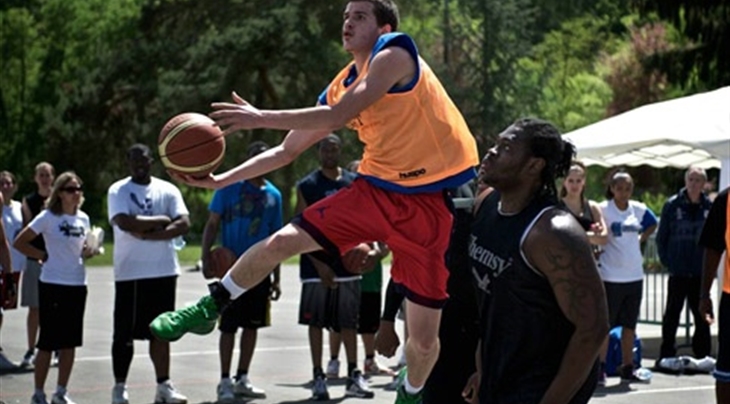 For the first edition, 67 players turned out and made up 18 teams.

"For the first event it was a nice success," said Thuler.

"Our goal was to reach out to a maximum of players from the city of Geneva and to create durable contacts with the Streetball community here. "

The weather is always cause for concern when it comes to 3x3.

However it turned out to be the icing on the cake.

"It was better than expected; the sun was out the whole day," Thuler pointed out.

"The only downside was that we had to cancel the dunk contest because of thunderstorms.

"In the end we were more than happy with the outcome of this tournament."

So happy in fact that Urban Basket is looking ahead.

"We are already planning and working on next year's edition of Urban Basket in Geneva, "he announced Thuler.

2012 is a very important year for Urban Basket as they hope to lay the foundations of a long and lasting 3x3 culture in Switzerland.

"We hope that after this year we will have achieved the goal of establishing 3x3 in the region, "he explained.

Our main goal is to compete against the top European competitions and attract players from Germany, France, Italy and other countries to come and participate at our events."

There is no doubt that with an unconquerable spirit, Urban Basket is set to make itself a name in the expanding world of 3x3.