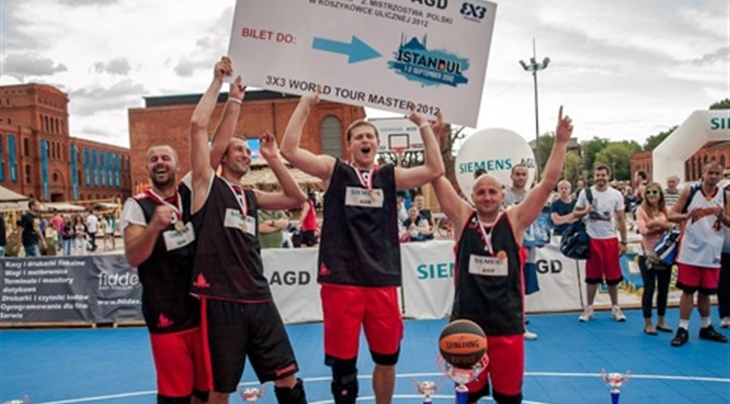 LODZ/KIEV (3x3) -Two 3x3 championships were held, one was in Lodz Poland and the other in Kiev Ukraine.

The winners of these championships have been awarded a trip to Istanbul for the FIBA 3x3 World Tour stage that will take place on 1-2 September.

The Polish 3x3 championship was held in front of the 'Manufaktura', Poland's biggest shopping mall. There was a large audience and many by passers were able to discover and appreciate the winning team 'Druzyna Budextan Streetball 4' success.

Prior to the finals in Lodz, seven stages had taken place across the country, where many teams and players were able to showcase their talent and love for 3x3 basketball.

In Ukraine after a hard fought finals, team 'Avantazah-Politekhnik' came out on top by winning two of a best of three finals series.

The spectators were thrilled at seeing some spectacular plays, dunks and block shots during the course of the event.

Anna Sorokina, Director of the Department for Olympic Movement of Ukraine and 2000 Sydney Olympic synchronized diving Bronze medalist, was present and was more than impressed at the level of intensity that was being displayed at Pushkin Park in Kiev.

Both champions from Poland and Ukraine will take part in Istanbul's 3x3 World Tour stage.