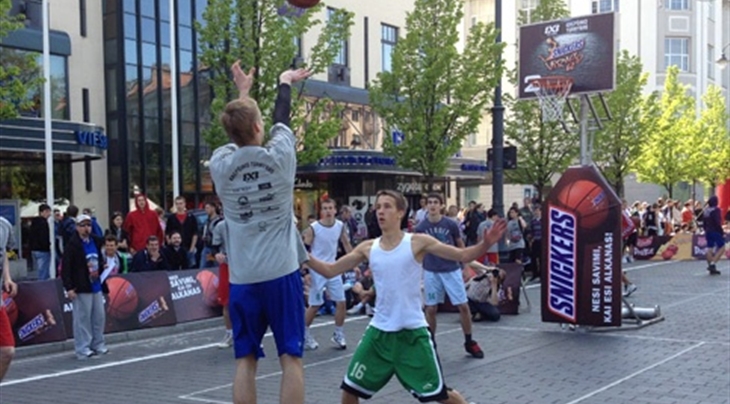 VILNIUS (3x3) - Basketball is hands down considered as the national sport in Lithuania and 3x3 is added proof of to that known fact.

"Most people play basketball in Lithuania, "pointed out Linas Stankevicius, Snickers-Virus manager. He has been heavily involved with 3x3 over the years and continues to take Snickers-Virus to new heights.

The 3x3 Snickers-Virus Quest tournament was under way in the capital city of Vilnius early this month.

There was an amazing 146 teams that participated over five different age categories.

"Basketball in Lithuania is like a religion, "exclaimed Stankevicius. The country has had a long and lasting interest for 3x3 basketball and this is just the beginning of many future events.

"3x3 basketball has been played here for the past 15 years so this doesn't come as a surprise to anyone, "explained Linas.

The overall feedback was very good from the players and also from the spectators. Prizes were handed out but most importantly the players were more than ever motivated to win.

Only one side came out on top and that was team 'Panevezio balsas' which was composed of Tomas Taucius, Danas Magila, Laurynas Kochnauskas, Linas Kivyta.

They will have a chance to battle for the only open spot at the September 3x3 Istanbul World Tour event at a 3x3 Quest tour final in Palanga, Lithuania later this month.