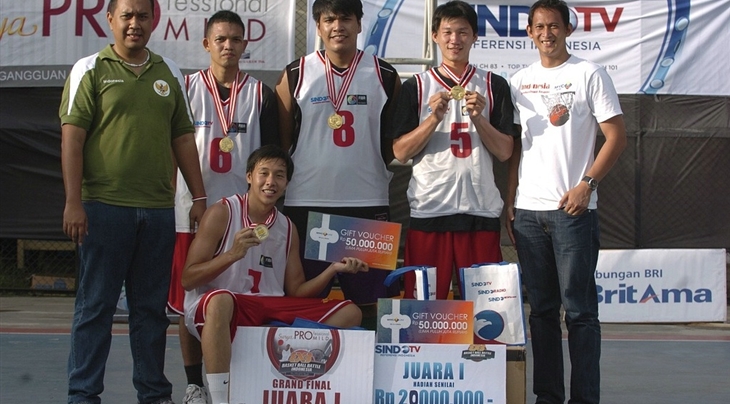 JAKARTA (3x3) - The first edition of the FIBA 3x3 Basketball Battle came to an end on Sunday 15 January in Jakarta. The Indonesian Basketball Association took the initiative to promote 3x3, fulfilling the players and spectators expectations.

Overall 191 teams participated in what was the first full 3x3 tournament season in Indonesia. The tourneys were held in five cities across the country, the final took place in the capital city of Jakarta.

The Anak Manis I were the winning team and proud champions of the first edition. The group was composed of the following players: Bohardi, Januar Hutabarat, Raymond Sebastian and Jonathan Frederick.

The crowd was not disappointed; with the last game culminating to a 21-19 victory for Anak Manis I. These four players will have the privilege of representing Indonesia in the 3x3 international tournaments.

"We will get to see the new stars emerging from 3x3 Basketball and a chance to send representatives from Indonesia to participate in the International competitions like the Olympics by the time 3x3 becomes a self-sustained new FIBA discipline." said Agus A. Mauro, Secretary General of the Indonesia Basketball Association.

The event received an added boost with the help of Sindo TV, the biggest television syndicate in Indonesia. Throughout the entire event games were covered and broadcasted.

Another useful tool that was used was Social Media which enabled to spread the news of the event to a wider and younger audience.

The Association's goal is to have 64 teams participate in each city during the course of the second edition. No doubt that with continued effort this objective will be reached.