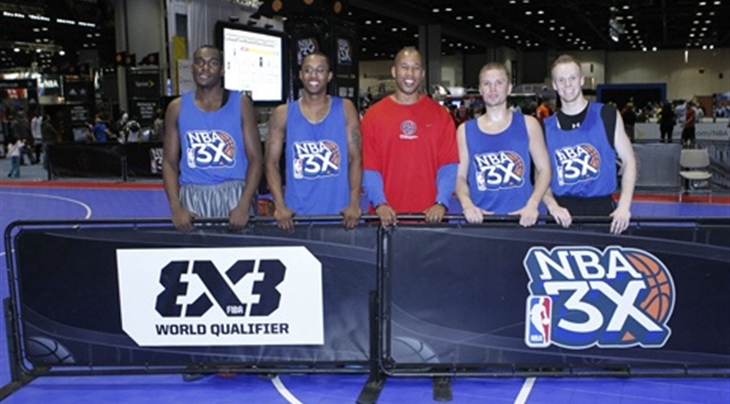 ORLANDO (3X3) - There will be more than just Olympic basketball going on in 2012 as this summer also sees the first ever FIBA 3x3 World Tour. Five World Tour Masters will qualify teams for a grand Final held in Miami 22-23 September.

The first of 70 World Tour qualifying tournaments took place in Orlando, where 'Ohoops' were the winners of the NBA 3x All-Star Jam session in Orlando. The first of 80 teams to qualify for one of the five World Tour stops, the group composed of Gerrod Trylten, Jean Marc Olivier, Ricky Claitt and Nick Trapp will next take center stage in the New York World Tour Masters on Saturday 18 August.

FIBA.com caught-up with Gerrod Trylten to ask him about his thoughts and impressions on qualifying for New York and 3x3 basketball in general.

FIBA: How does it feel being the first team to win a 3x3 World Tour Qualifier?

Gerrod Trylten: Being the first team to win a 3x3 Tour Qualifier is special. We are hoping to continue in New York, Miami and internationally. Qualifying first is a great feeling, being apart of an event that could potentially be Olympic bound - words can't describe how we feel.

FIBA: For how long have you and your teammates been playing 3x3 tournaments together?

Trylten: We haven't played in any 3x3 tournaments together; however, we do train, practice and play together on a regular weekly basis, sometimes two to three times a week. We have built a strong chemistry on the court that we feel confident in and look forward to preparing for future tournaments.

FIBA: Do you play five on five basketball?

Trylten: We do play in men's leagues around Central Florida, typically with friends and guys that have played high school & college basketball at a competitive level. It is difficult for us to participate as much as we would like, due to our schedule; working is afternoon through the evening, which limits our opportunities.

FIBA: What makes 3x3 basketball different from normal five on five and what are its advantages?

Trylten: In five on five easier it is easier to determine weaknesses, pin point falters in the opposing teams offenses and defenses, it constantly creates mismatches. 3x3 - there's no time for mistakes, difficult to establish a comfortable lead, but with a strong scoring run - the game could be over. 3x3 is much faster paced, constant movement and the understanding of how basketball can truly be played in a five on five setting is based around a 3x3 game Phil Jackson has mastered that as a coach from all angles on the court.

FIBA: What's the level of excitement for your team and you knowing that you'll play at the 3x3 World Tour in New York this coming August?

Trylten: We are focused. The excitement between our team was and still is high as we are passionate about playing the game of basketball and with this opportunity to participate in this event, we are motivated to be in New York this August. We have an understanding between us that not only brings our level of play up and excites us, but allows us to know each other's roles and what we are capable of doing as a team.

FIBA: What would your ideal 3x3 team look like?

Trylten: The team we have now - 3 strong guards and a point/forward, that know and understand the game, play hard the entire game and have the excitement in every play, supporting and encouraging each other.