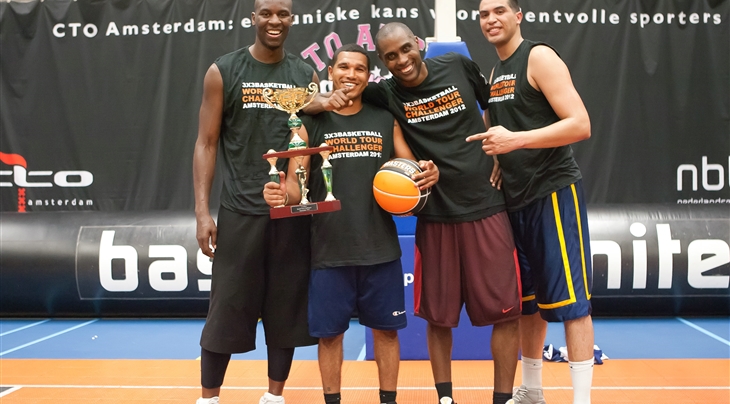 AMSTERDAM (3x3) - JR 4 BALL from The Hague won the 3x3 World Tour Challenger held in Amsterdam, Netherlands on Saturday to clinch the berth on offer for the Madrid Masters.

JR 4 Ball beat another team from The Hague, ST4R Ballers, 18-12 in the final of the 3x3 tournament that was held as part of the "Basketball Experience", a side event at the 2012 FIBA U17 World Championship for Women.

The team that will represent The Hague in the Spanish capital on 7-8 September consists of Rafael Haas, Gideon Nicastia, Ferdy Luydens and Chip Jones.

"It means a lot to win this and go to Madrid," said Haas.

"Several times we were champions of the NBB Streetball Masters but we haven't won the last two years so we wanted some revenge. Now we got it and we're going to Madrid.

"It means a lot that we got an invitation from the NBB and FIBA to participate in this tournament and win it.

"This was a really good and high-intensity competition. There were only eight teams but they were eight great teams. So it was perfect."

Haas talked about what makes his team special.

"We've got good diversity: we have an inside-outside game, we've got strength and quickness and shooting. Today our shots were off but we did it off of determination."

Looking ahead to Madrid, JR 4 BALL's captain has just one thought in mind.

"We have to get in shape again and we're going for it," he said.

The two finalists at the Madrid Master will qualify for the FIBA 3x3 World Tour Final taking place in Miami, USA on 22-23 September.